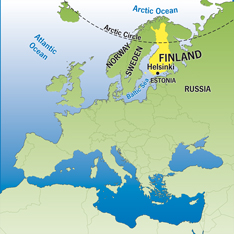 Finland is officially called the Republic of Finland. The area was first inhabited in around 8500 BCE. It was historically part of the Swedish Kingdom and the Russian Empire. Finland gained independence from the latter in 1917. It is the most sparsely populated country in the EU. It has an area of 338,424 sq km, a population of 5.4 million, and a very high HDI of 0.892.