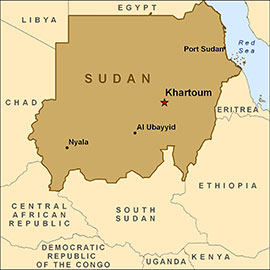 Sudan is officially called the Republic of Sudan. It was the largest country in Africa until 2011, when South Sudan declared independence. Sudan’s predominant religion is Islam. Sudan was under British control from 1924 to 1956, when it gained independence. Sudan has been in a constant state of violent internal conflict since 1989.