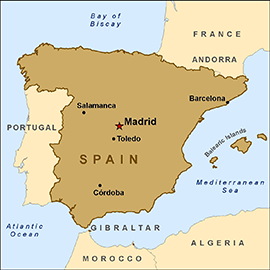 Spain is officially called the Kingdom of Spain. Modern humans arrived in the Iberian Peninsula around 35,000 years ago, and the region came under Roman rule in 200 BCE. In the 8th century CE, the region was conquered by Moorism Muslim armies. Spain emerged as a unified country in the 15th century. It has an area of 504,645 sq km, a population of 46.7 million, and a very high HDI of 0885.

Although the primary language in Spain is Spanish, there are several recognized regional languages including Catalan, Galician, Basque, etc.